Dive Deeper
How does DNA provide a cell with instructions?

From day one of egg fertilization and subsequent embryo development, every human being has a unique genetic code (or genome) consisting of deoxyribonucleic acid (or DNA).  This genetic information is tightly packaged and arranged on 23 pairs of chromosomes (numbered 1-22, plus 2 sex chromosomes X or Y), for a total of 46 chromosomes, which are stored in the nucleus of each human diploid cell. 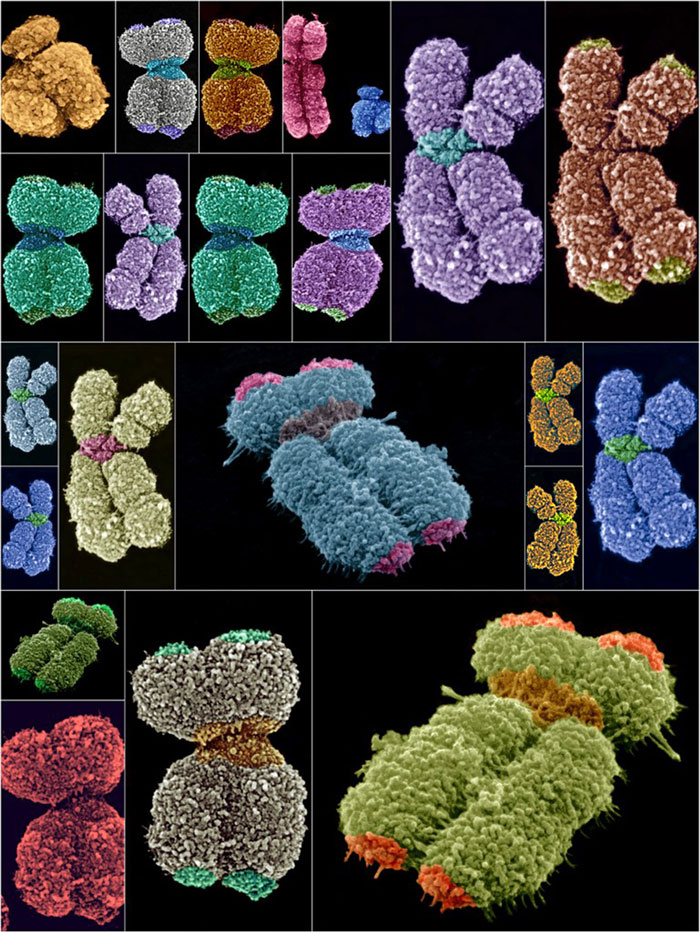 This collage of colored scanning electron micrographs (SEMs) shows human chromosomes, the packaged form of DNA. During cell replication, the DNA condenses into chromosomes. Each chromosome consists of two identical strands, aligned parallel to each other and joined at an area called a centromere, highlighted here in a different color. The terminal regions, called telomeres, help protect the DNA during cell replication. These are also highlighted. A cell is included at top left. The XY sex chromosomes are at top center. (Image Credit: Science Source)
How many genetically different eggs or sperm can each parent create?

Both the sperm and the egg have 23 chromosomes that combine during fertilization to form a unique set of 46 chromosomes.  In each pair of chromosomes, one came from that person’s father, the other from her mother. As eggs and sperm form, they receive one chromosome from each pair. Since 23 pairs of chromosomes can be reorganized together in 8 million unique ways, each parent could produce 8 million genetically distinct sex cells.1

DNA consists of four different nucleotides (A, G, C, T) that join together on a single strand and make a sequence.  DNA is normally found as a double stranded molecule, in which two separate DNA strands are wound around each other to form a double helix and each nucleotide of one strand forms a base pair with the nucleotide of the opposite strand.

In the same way that 26 letters of the alphabet combine to create a countless number of words and sentences for communicating, so it is with DNA.  The four nucleotides combine in different ways to create various sequences, called genes, which are fundamental units of genetic information that provide specific instructions for life.

What is the probability that two siblings will have the same DNA?

The probability that two non-twin siblings have the same combination of chromosomes is one in 7 trillion!2 In fact, the probability is even lower because chromosomes sometimes swap genetic material with one another during cell divisions.3 Even identical twins, who begin life from a common egg-sperm pairing, often have small genetic differences, called copy number variations, in which one small section of DNA gets copied more than once.4 Therefore every human individual is genetically unique.

Interestingly, most of the cell uses the DNA from the nucleus, however, mitochondria, which are parts of a cell responsible for producing energy, uses its own DNA. That DNA is inherited directly from the egg, and therefore is an exact copy of the mother’s mitochondrial DNA.