CLI’s brief details 12 specific lines of new scientific evidence since the 1973 Roe v. Wade decision that demonstrate the humanity of unborn children, including their capacity to feel pain well before “viability.” The brief reads in part:

“Modern scientific methods show that, starting early in the second trimester, the human fetus actively distinguishes between music and noise, exhibits intentional and even social behavior, and shares—with other humans and animals—the neurocircuitry necessary for a conscious experience of pain. And yet this Court’s current approach to abortion is hamstrung by 50-year-old precedents based on outdated science.”

“The Supreme Court’s abortion rulings have been predicated on scientific information that was current several decades ago. As our brief expounds, those precedents are not merely out of date, but severely out of touch and cruel given the undeniable evidence that a living, sentient human being exists in the womb. Follow the science.  Late-term abortion limits are grounded in science and compassion for mother and baby. Our research shows such limits are also well within the mainstream of both American opinion and international norms.”

The national pro-life group Susan B. Anthony List (SBA List) also filed an amicus brief today in the Dobbs case. Signed by nearly 80 women lawmakers representing 45 states, SBA List’s brief joins the state of Mississippi’s merits brief in calling on the Court to reverse Roe and Planned Parenthood v. Casey.  The SBA List brief also highlights the significant advancement of women in state legislatures since the 1970s, now representing a “critical mass” of more than 30% of state legislators overall.  The brief urges the Court to give greater deference to these legislators in making abortion policy.

Charlotte Lozier Institute is a hub for research and public policy analysis on some of the most pressing issues facing the United States and nations around the world. The Institute is named for a feminist physician known for her commitment to the sanctity of human life and equal career and educational opportunities for women. 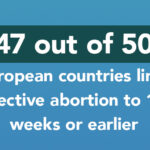