Hearing in the Womb

Later in pregnancy, the fetus can distinguish different voices and different syllables, such as “Ba-Bi vs. Bi-Ba”.3 At birth, the baby can easily recognize his mother’s voice, her native language, and music that he has heard in the last ten weeks of pregnancy.4

Sounds are quieter and lower in pitch inside the uterus. The mother’s heartbeat, bloodflow and digestive system all create sounds for the fetus’s developing ears to hear. The lowest pitches in the mother’s voice reach the fetal ears quite easily.5 The relative lack of high-pitch sounds interspersed with a rich variety of low-pitched sounds allows neurons in the fetal brain to correctly wire to the cells in the cochlea so that hair cells in the cochlea can detect pitches 1/30th of the difference between notes played by two adjacent piano keys.6 Most of this tuning occurs between 26 weeks after conception through the first few months after birth.7 Interestingly, when researchers recorded brain activity from fetuses every two weeks from 26 weeks after conception through the first few weeks after birth, they observed an electrical pattern often seen when adults distinguish different pitches, even in the youngest fetuses.8 Sounds can also elicit a change in fetal cerebral blood flow measured by fMRI at 31 weeks after conception.9

Some researchers have found that the fetus pays attention when the mother speaks. When mothers stroked their bellies or read a book out loud, fetuses from 19 to 31 weeks after conception changed their behaviors. Specifically, when the fetuses had been stroked, they moved their arms, heads, and mouths more. When their mother read aloud, they moved less than when she had been still and silent.10 In another interesting study of fetuses at 23 weeks after conception, the fetuses opened their mouths more often when the mother sang a nursery rhyme than when she made other mouth noises, such as chewing and yawning.11 This is one of the first examples of the fetus imitating the mother’s vocal behaviors, and surprisingly, this occurs without any visual information.

Research shows that when premature infants born between 23 and 30 weeks post-conception listen to recordings of their mother’s voice and heartbeat in the neonatal intensive care unit, they have larger auditory processing areas in their brains than if they do not listen to these maternal sounds.12 This suggests that the fetus needs these sounds for proper hearing development.

Exposure to extremely loud noises (>80 dB)  with low frequency sound from 30-40 weeks gestational age will delay the tuning of the cells in the cochlea and can even damage the infant’s hearing.13 It is important to never put headphones directly on the abdomen because the sounds from each earphone combine in the womb and can damage the fetal cochlear hair cells. 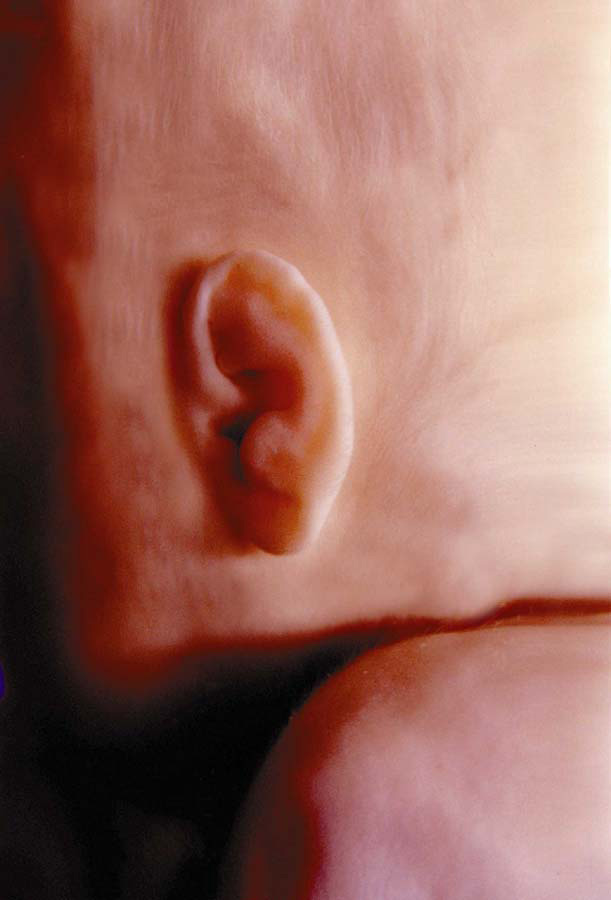 The fetus consistently responds to sounds in the environment between 20 and 22 weeks after conception. (Image Credit: Priests for Life)
Does the fetus recognize her father's voice?