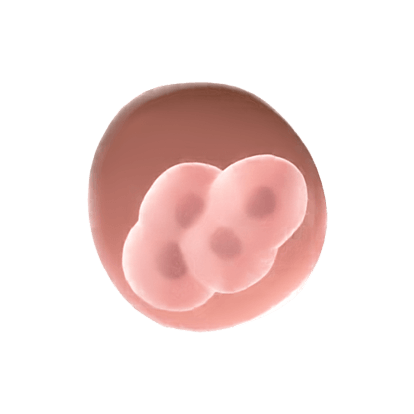 Fertilization and journey to the uterus

The human body has an amazing automatic growth process that sets to work once the egg and sperm have joined. Each step in the first week is essential for the health and welfare of the newly created human!

When does life begin?

Both the sperm and the egg are alive and contribute half of the genetic information needed to create a new human being. A new life – a unique human individual – is formed at conception, also called fertilization, when a man’s sperm combines with a woman’s egg inside the fallopian tube. The resulting single-celled human is a zygote.2  The zygote’s DNA, packaged into chromosomes, has every instruction the zygote needs to develop, grow and become an adult. The DNA sequence produces the genetic variation that creates a person’s biological individuality, including sex, eye color, and other physical traits. Individuals with XX sex chromosomes are female and those with XY sex chromosomes are male. There is enough genetic variation that no two humans have been, or ever will be, genetically identical.3 (National Institutes of Health (US), 2007), https://www.ncbi.nlm.nih.gov/books/NBK20363/.”] Over time, the single-cell zygote will become a 30 trillion cell adult.4 Within 24 hours of ovulation, one sperm penetrates the egg, fertilizing it. Now the cell is a zygote – a new human being. Within seconds, that sperm triggers a chemical change in the outer coating of the woman’s egg, called the zona pellucida. This prevents other sperm from entering the egg.5 The sperm keeps its tail until it has delivered the male’s chromosomes, contained within a membrane casing called a nucleus, adjacent to the female’s chromosomes contained within a separate nucleus. The sperm’s tail falls off and the membranes surrounding the chromosomes from the egg and the sperm degenerate so that the chromosomes from both mom and dad can join for the first time.6

What happens after fertilization?

Between 12 and 30 hours after the egg and sperm are joined, the DNA replicates. Then the two identical copies of chromosomes move to opposite sides of the cell, and the cell divides in two. Within 40 hours of fertilization, the two new cells divide again creating a four-celled human. The early embryo’s cells divide rapidly, each time doubling the number of total cells. Each of these cells is capable of becoming any of the cells in the human body. Interestingly, each new set of cells gets smaller and smaller, fitting within the original zona pellucida, as shown in the picture below. This early embryo, called a morula, resembles a tiny raspberry.7 In the first week, the sperm and the egg unite to create a unique single-celled human, the zygote, with all the genetic instructions to form an adult with distinct physical features. The embryo follows a predictable set of cell divisions for the first week of pregnancy, forming a morula and blastocyst as the developing human travels through the mother’s fallopian tubes. (Image Credit: Science Source)
When does the connection between the embryo and the mother start?

Even as the cells keep dividing, tiny hair-like structures in the fallopian tube sweep the morula towards the uterus. The morula stretches into a hollow ball and becomes a blastocyst. The blastocyst arrives at the uterus between four and five days after conception. The embryo releases enzymes to break down the zona pellucida. The embryo can implant after the zona pellucida disintegrates.8  Some studies suggest that the embryo may release signals that form a biochemical connection with his mother, even before implantation.9 Notice the zona pellucida surrounding the embryo in each of these pictures. The embryo travels enclosed within the zona pellucida through the fallopian tube until reaching the uterus. (Compilation image credit: Katrina Furth, Ph.D. using images Day 1, Day 2, Day 3, and Day 5)

Dive Deeper
DNA Replication
DNA replicates at 208,000 base-pairs per second, replicating the entire set of genes within a few hours...
Read More
Pluripotent Cells
Every cell in a person’s body has virtually the same sequence of DNA...
Read More
Twins
Identical twins come from one zygote that splits into two individual embryos...
Read More
Previous Stage
Next Stage
Back to The Voyage of Life
Get updates on life issues
Sources
See Full Bibliography