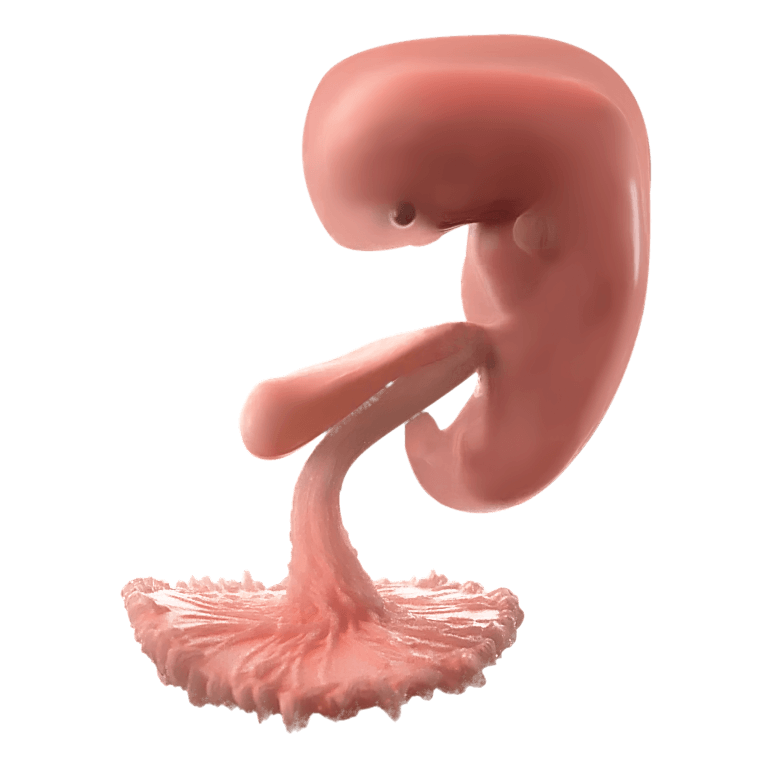 This week, the unborn baby is about 10,000 times bigger than he was at conception. For perspective, that makes him the size of a blueberry, or a little under a quarter inch from rump to head. At this point, his head is one-third of his overall size2 because the head grows faster than the rest of the body. In fact, since most newborn babies are born with about 100 billion brain cells, called neurons, the brain must grow at an average rate of 250,000 neurons per minute throughout the pregnancy.3

In the first few weeks of the embryo’s life, brain growth is astonishing!

The face becomes more recognizable in the fifth week after conception. Outgrowths from the forebrain become the optic nerve and the back of the eye. These cells interact with the outer surface of the embryo and form the eye’s lens.5 The nose gets a pair of little depressions that will become the baby’s nostrils. The early mouth and tongue start taking shape.6

The heart’s pacemaker cells also develop in the fifth week after conception. These cells integrate into the right atrium of the heart.7 From this position, these pacemaker cells work in cooperation with nerve impulses to control a person’s heart rate for the rest of her life.

The respiratory system begins forming at the very end of the fourth week, around 26 days after conception. First, the 2 primary lung buds grow. These lung buds become the left and right lung. By 4 ½ weeks, the major airways to the left and right lungs, called bronchi, have grown. These bronchi divide into three major lobes on the right and two major lobes on the left.8   In the fifth week, the airways start branching repeatedly. This continues over the next ten to twelve weeks, until the airways have branched at least 17 times. After birth, these airways connect the alveoli, where air is exchanged in the lungs, to the windpipe and the external air.9 Illustration of the stages of lung development. The lungs start developing around the fourth week after conception. The lungs become progressively more branched and more able to exchange gases with the blood, so that the full-term newborn baby can breathe unaided. At birth, the baby will have developed 300 to 600 million alveoli, or about 1000 per alveolar sac. (Image Credit: Science Source)
At this stage, the embryo’s skin is just one cell thick.
SHARE

At this stage, the embryo’s skin is just one cell thick. That makes the skin transparent and capable of excreting water and salts into the amniotic fluid.10 The limb buds keep growing, with the arm buds growing before the leg buds.

Dive Deeper
Future Eggs and Sperm
Did you know that all of a woman’s eggs formed before she was born?..
Read More
Previous Stage
Next Stage
Back to The Voyage of Life
Get updates on life issues
Sources
See Full Bibliography